If you are like me, this time of year tends to puts you into the mood to attend fall festivals and events. A lot of these events tend to be centered on German-inspired foods, beers, contests and live entertainment. On October 8th, we were given two complementary VIP package tickets to Oktoberfest Live! presented by Leinenkugel's KC at the Kansas City Live! Block in the Kansas City Power and Light District.

The events of the day, started in the morning with  Sprint Family Fun Days in the Kansas City Power & Light District, which included: trick-or-treating, pony rides, barnyard petting zoo, a bounce houses, and other live entertainment.

In the afternoon, things started to transition into Oktoberfest Live! activities that included: a Wiener Dog Race, tapping of a golden keg, German folk music. There were multiple contests that took place throughout the afternoon, including: Pretzel eating, hammerschlagen, stein stance, sauerkraut eating, and log lifting. 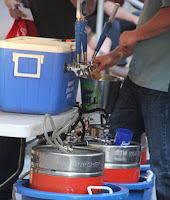 Everyone had multiple ways to enjoy the afternoon at the Kansas City Live! Block, starting with beer tasting session that lasted from 4 – 7 pm. Participants received a tasting glass and card that allowed them to visit the three tasting tents from 4 – 7 pm. to redeem five samples of their choice.

Next you could purchase tickets for one of the two VIP sessions from 4 – 6 pm or 7 – 9 pm. Both sessions got exclusive access to Leinenkugel’s patio and bar during the session, along with two Leinenkugel’s 16 ounce beers, a fish fry, gourmet pretzels and a swag bag. Our swag included the bag with a bottle opener, sunglasses, plastic beer mug, $15 gift card, and 5 Leinie Coins good during for Mon – Fri happy hours.

If you were looking to stay throughout the whole event from 4 – 11 pm, you could purchase the a Das Boot Community Table. This package included a table for ten along with five pitchers for Miller Lite or Leinenkugel's Oktoberfest beer, ten commemorative “das boot” glassware, table service and Leinenkugel's swag.

Without knowing how many people would be attending this event, we thought it might be a good idea to show up earlier to the Power and Light District. We arrived just as the Sprint Fun Days were wrapping up around 3 pm, and just as the German band was getting started. We seated in the Leinenkugel's KC patio area where we had a clear view of the events taking place on the main stage, during our VIP session. We were given two Leinenkugel's beers as part of the package and we were also treated to a buffet where most of us in the patio area went back for extra helpings of fish, fries, and pretzels. 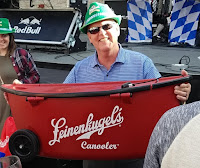 The “Festhaus-Musikanten” German folk band set the mood, for everyone who lined up to participate in contests. The “hammerschlagen” game was fun to watch, and I had to look-up the rules of this game to get a better understanding of what was happening. Then there was the beer stance game, which is exactly as you've seen at other German fests. Each participant is given a liter mug full of beer, and the object is to hold it in the air for as long as you can without spilling a drop.

Also, during the games and music, you could sample beers from the tents setup for the tasting session. They had several beers to choose from, and we were given a tasting ticket allowing each of us to get five separate 2 oz pours of beer. The lines were short for all of the beers, and we tried all of the Leinenkugel's beer they were offering.

This was the inaugural year for Oktoberfest Live!, and from our point of view everything seemed to go smoothly and without any noticeable incidents. Overall, this was a great experience for us and we certainly look forward to attending the next Oktoberfest Live! event at the Power & Light District. The VIP session was definitely worth the price and it definitely gave us a taste of how they do Oktoberfests in Wisconsin. The atmosphere was fantastic and very inviting, and we were very impressed with the food, beers, and service.